When to grow Red Cabbage ?

Monty likes to eat Red Cabbage with his Christmas dinner and it seems now is a great time to sow these. All brassicas – Red or green cabbage, broccolis and cauliflowers can all be sown now for winter harvest. He uses modules and fills with seed compost which doesn’t need to be too rich. Brassica seeds are quite large. He is using the Red Drumhead variety of red cabbage and aims for 2 or 3 seeds per module. Remove all but one to leave one strong plant per module. Leave these a few weeks until they are ready to prick out and put them in a larger pot ready to plant out towards the end of July. 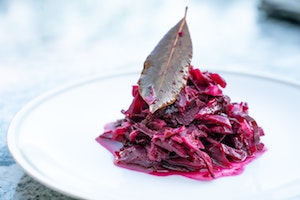 The 3 sisters concept comes from Central America, based on the combination of sweetcorn, squash and beans. The 3 crops benefit from each other. Beans climb up the support of the sweetcorn and the squash would keep the ground cool.

Firstly, Monty starts the sweetcorn from seed about 5 weeks ago and he is now planting them out in the raised bed in a grid format. Sweetcorn is pollinated by wind. If you just do a simple row the wind would blow the pollen away and they would not be pollinated. Will deliver sweetcorn pods from August/ September onwards.  Space out 18 inches to 2 foot apart.

Second is to plant a squash – a courgette – summer squash and he is planting 2 varieties.

Thirdly,  you can plant a  French bean “Purple Teepee” with purple pods.  He is spacing one plant between each of the sweetcorn. These leave nitrogen in the soil which sweetcorn can benefit from too.

Frances is on her allotment and starting to grow hops. She has chosen a space  to climb against the allotment shed in a sunny position. The hop plant contains tendrils which are vines and which will quickly climb up.

The Prima Donna variety is actually a dwarf hop but it is still fairly big. 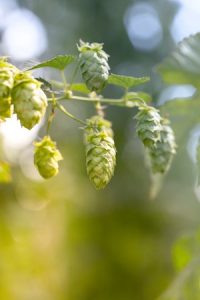 She is making sure the soil is well manured and in the sun without too much wind. In the first year she keeps just 2 or 3 vines and trims away the others. In the year after the plant will be more mature and hopefully deliver more hops on more vines. The vines can be held up by tying gardeners tweed around screws or nails to create structure when the hops can climb.

Are hops used for anything besides beer ?

As well as being used for beer they can be used in herbal tea. The hop leaves can also be used as a subsitute for basil leaves when you are preparing a tomato bruschetta. Apparently the aroma from cut hop leaves may be be used to calm you before bedtime.

Which country produces the most hops ?

America produced 40% of the worlds volume of hops in 2019 followed by Germany at 38% according to Statista. The UK has a measly 1% of the world’s production.